Continue reading below to see what else Vampire Senpai has to offer you today.

How to Play Vampire Senpai Slot

Before you can set the reels of Vampire Senpai into motion and go head-to-head against Jiangshi, you will need to know what game functions can be adjusted before each spin which we have highlighted for you below. 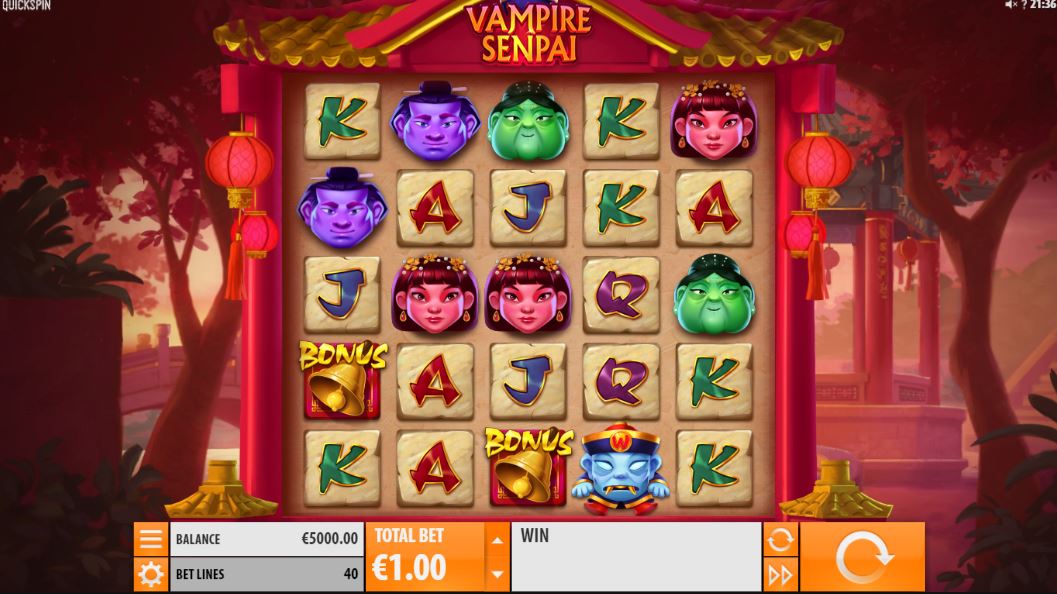 Firstly, Vampire Senpai players should look to adjust their bet size by using the “Coin Value +/-” buttons to set how many coins they wish to bet per spin. If you happen to be short on time then simply hit the “Max Bet” button to your bet to the maximum amount without having to manually adjust.

Once you have set your desired bet amount you are ready to click the “Spin” button to initiate the spinning of the reels. If you are tight for time and do not want to fuss around hitting the spin button every time you are ready to set the reels into motion, then you can also use the “Auto” button to automatically spin the reels a set amount of times that you wish them to be spun.

Quickspin’s Vampire Senpai is made up of five reels and five rows, which a total of 40 paylines are available from. Players can play Vampire Senpai from anywhere between 10p per spin to £100 per spin and a jackpot prize of 8,800x players stakes is available.

The Vampire Senpai video slot offers an RTP figure of 96.19%.

The image of a vampire acts as the wild symbol and landing this on the reels will turn any surrounding medium-paying symbols into a wild. Symbols that turn wild also have the same ability to turn symbols wild.

This feature can activate randomly during the games base spins and if it does, anywhere between 3 and 9 talisman wilds will appear on reels 1, 2, 3 and 4.

After seeing what Quickspin’s Vampire Senpai has to offer, we have to say that we are big fans. From the outside, Vampire Senpai looks fairly simple, but with wilds, scatters, free spins and a mystery wild features there is plenty of fun gameplay to enjoy. Also, add an 8,800x jackpot to the mix and an RTP figure of 96.19%, you have more than enough reasons to at least try Vampire Senpai.