Rich Wilde and The Tome of Madness Slot Review

Tome of Madness is a Play’n Go slot that was released in June 2019 and is the fourth chapter of the Rich Wilde series that has been ongoing from Play’n Go for some time. We will be taking a look at why so many players have enjoyed Tome of Madness since its release and will be assessing the RTP, features and bonuses that are all included within this sequel game.

How to play Rich Wilde and The Tome of Madness

Tome of Madness is a simple game to get started on and different levels of slot player will all be able to pick this one up very quickly. Begin by selecting your slot in accordance with the amount of money that you feel comfortable gambling with per spin, with this being done by clicking the + and – keys at the bottom of the screen. 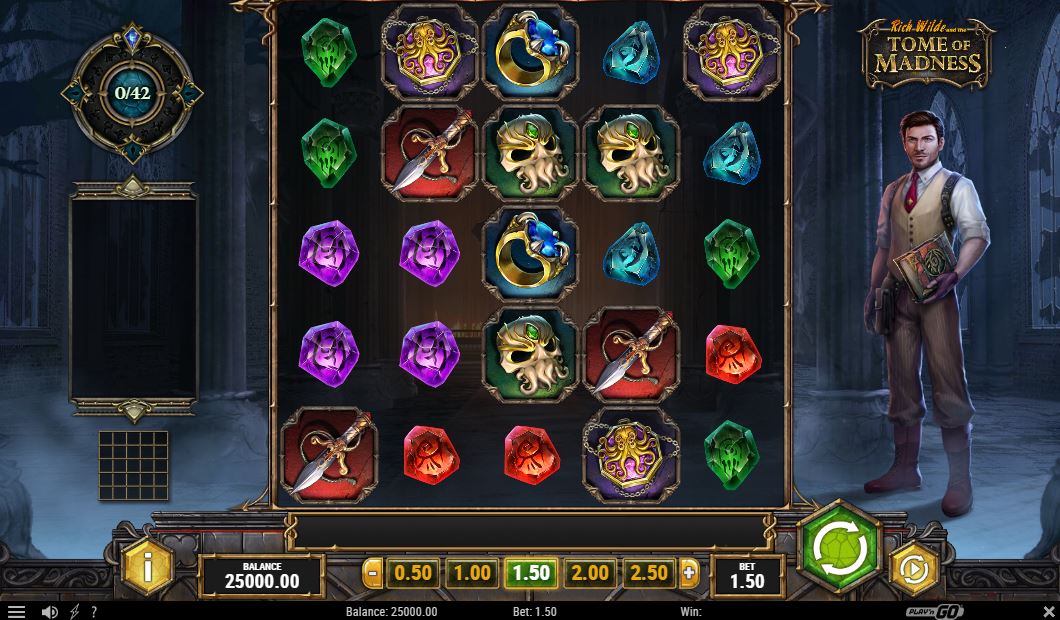 There is also autoplay available within the Tome of Madness slot, where you have the option to play out up to 100 spins automatically at a set price.

Tome of Madness can be played on Temple Slots, Leo Vegas or Amazon Slots, so if you’re interested in playing Tome of Madness visits one of those casinos.

Rich Wild and The Tome of Madness RTP

The Tome of Madness slot comes with an RTP rating of 94.52%.

Rich Wild and The Tome of Madness Bonuses

Bonus games are what many people play slots for, with them often holding the key to the biggest wins that you are able to secure within a game. The same goes for Tome of Madness, where there are a significant number of bonus games to unlock.

Throughout normal gameplay a pink Eye Mark will appear on the grid at a random point. If you are lucky enough to have a winning cluster on one of these Eye Marks, two Special Wilds will be added to the grid at the conclusion of the win sequence.

The Portal and Special Wilds

Every time you have a win, you will see the Portal charging up, which can be extremely rewarding. Winning consecutively will charge the Portal further and the more winning symbols you collect, the more Special Wilds will be added to the grid.

Every time players get a win it will result in the Portal becoming stronger, with the more winning symbols you get also resulting in Special Wilds being added to the

Other World Free Round Feature

Players must collect 42 winning symbols to trigger this feature and will also give you random Portal effects. For every three symbols collected over and above the special 42 mark, players will then get an extra Portal.

Once the Other World Free Round Feature has been triggered, players will notice 11 or 12 Eye Markers on their grid. One eye will open each time the symbol clusters are won, with a full collection of open eyes then resulting in the Mega Wild Cthulhu Symbol being revealed. This acts as a giant Wild, increasing your chances of winning on every following spin.

There is a Free Spins Feature that offers a free round of spins that includes multiple winning combinations, as well as the opportunity to unlock the Mega Wild Cthulhu Symbol.

Rich Wilde and The Tome of Madness Summary

Given all of the bonus features that are hidden within the Tome of Madness slot, players who give the game a try will have plenty of opportunities to land a big win. The gameplay is slick and we also enjoyed the theme of the slot, making this a game that we would absolutely recommend players that haven’t already done so to give it a go.