The Shadow Order is a Push Gaming slot that was originally released in May 2019. The game was first launched exclusively to Unibet Casino, but was then made widely available across a number of platforms in August of the same year, allowing many more players to access it. Below we will be taking a closer look at the RTP, features, and bonuses that are all included within The Shadow Order as part of our Shadow Order slot review.

How to play The Shadow Order

Players wanting to play The Shadow Order will first need to select their stake before being able to start spinning to their heart’s content. This can be completed by pressing the upwards arrow at the bottom of the screen, after which a box with a number of different stakes will appear. Your possible stakes range from 10p as a minimum stake all the way up to £100 as the maximum stake. 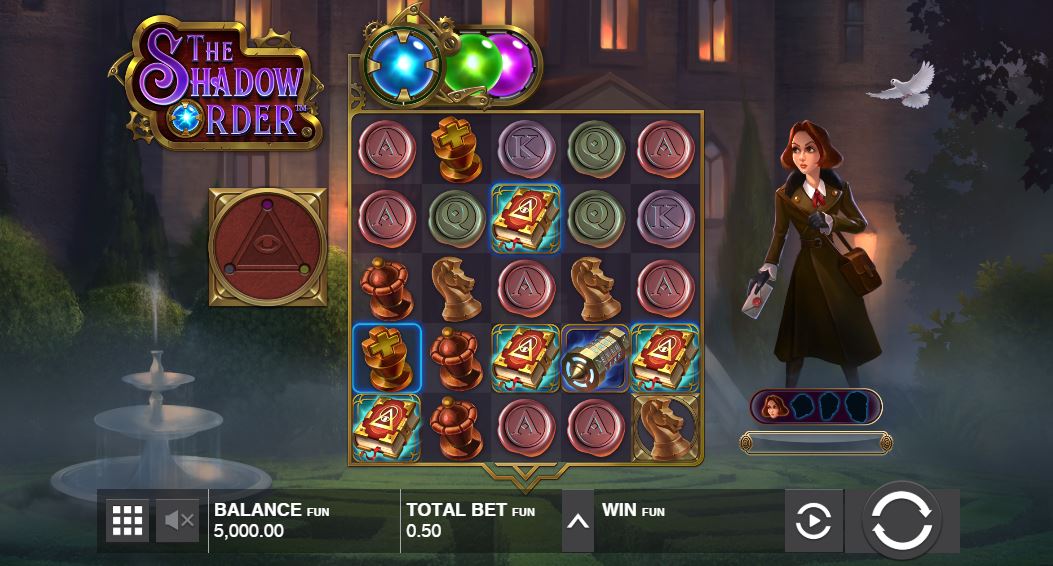 Save yourselves the time of completing the spins yourself by using the autoplay feature, which allows The Shadow Order slot to complete all of your spins for you. Select how many spins you wish to be completed at a particular stake and watch the action unfold before your eyes.

The Shadow Order slot comes with an RTP rating of 96.98%.

We all love bonuses games and features from our slots and The Shadow Order has a number of bonuses that can be triggered during standard gameplay. There are three different orbs at the top of your screen when playing The Shadow Order and these are vital to unlocking the bonus features. When you have cascading wins these orbs will fall into the reels as wild symbols, while an orb in the hot zone can trigger one of these three exciting features:

Each of the four main characters within The Shadow Order come with a bonus feature that can be triggered during play. The bonus features associated with each character are:

As well as these two feature games, there is also the opportunity for players to earn free spins when they play The Shadow Order. This feature is triggered when all three orbs reach the right corner at the bottom of the reels, at which point you will initially receive five free spins. Any orb that drops during the free spins feature will become sticky, which could see you earn up to a 30x multiplier, giving you some very nice potential wins.

At the conclusion of our The Shadow Order slot review, we must say that we are impressed with what it has to offer players. It’s rare that a game will have so many quality features alongside a high RTP rating, while they have also created a theme that is both unique and fun to play. The Shadow Order is a game all slot players should give a try in the not too distant future.