How to play Golden Cryptex

Before you can begin playing you must understand the functions that can be adjusted within Golden Cryptex to personalise the game to be played the way that you feel most comfortable with and enjoy. These will enable you to get the most out of the slot and play it your way. First of all you will need to select the size of the stake that you are playing with, which can be done by selecting the stake icon in the bottom left corner of the screen. 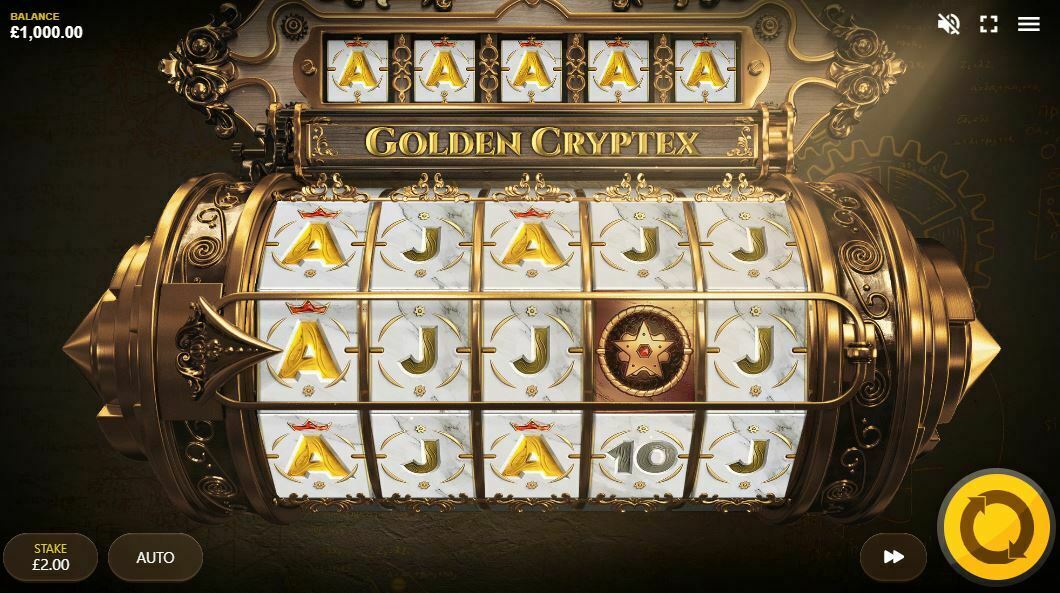 There is a wide variety of stakes to choose from that will then appear on your screen, with players advised to select a stake that you both feel comfortable with and that falls within your account balance at that time. The autoplay feature is also available to Golden Cryptex players, with this being available via the ‘auto’ icon next to the stake icon in the bottom left corner of the screen. Here, you are able to complete either 10, 20, 30, 50 or 100 spins at the click of a button.

The Golden Cryptex slot comes with an RTP rating of 94.66%.

There are a number of bonus features included within Golden Cryptex, with these bonuses being the things that you should really be hoping to unlock in your pursuit of big wins within the game. The first of these is the code-cracking bonus feature, which is triggered when you land a combination of five or more matching symbols. When you trigger this you will see five symbols lined above the reels, but what you are looking for is to see five aces across the middle row, as this gives you the biggest payout and triggers the Golden Spins feature.

Players can also access a Second Chance feature that applies if you land three or four aces across the middle row, with these then remaining frozen in place while the other reels spin again. This will then give you a second chance of triggering the bonus round or could give you another respin instead.

There is also a Free Spins feature included within Golden Cryptex, which is triggered when the Cryptex Code Ace is upgraded to the horseshoe symbol. This then immediately rewards you with 10 free spins. Landing just one more symbol from the ‘code’ above each reel will then give you the Cryptex Cash win. Players that are able to crack the code during the free spins feature will then see a further three extra free spins added to your total. If you manage to upgrade to the highest value symbol it will then remain in place for the rest of the feature.

There are plenty of positives that come with Golden Cryptex, not least the fact that there are a number of bonus features included within the game that can unlock some pretty significant wins. The extra opportunities included within these bonus games can also see you have additional chances to win when you get the chance to do so. However, we did find that the base game was, at times, a bit monotonous and the maximum win available to players is lower than what you could find on other slot games.