Fire Joker is a Play’n Go slot game that was launched back in June 2016. It has become popular for a number of reasons amongst slot players, reasons which we will be taking a closer look at during this Fire Joker slot review. We will be inspecting a number of aspects related to the game such as its RTP, features, and bonuses.

How to play Fire Joker

Fire Joker players will need to first select their stake amount before they can think about playing the game. This can be done by moving between the stake amounts that are visible at the centre of the bottom of the screen, with players having to press the + and – symbols to see the bigger and lower available stake amounts respectively. The autoplay feature is also available within this slot game, allowing you to complete up to 100 spins automatically at a set stake with just one click of a button.

All in all Fire Joker is simple to play, however, compared to some other games like Triple Jokers slot which is slightly more complicated, so overall Fire joker is very easy with it’s 3 reel design. 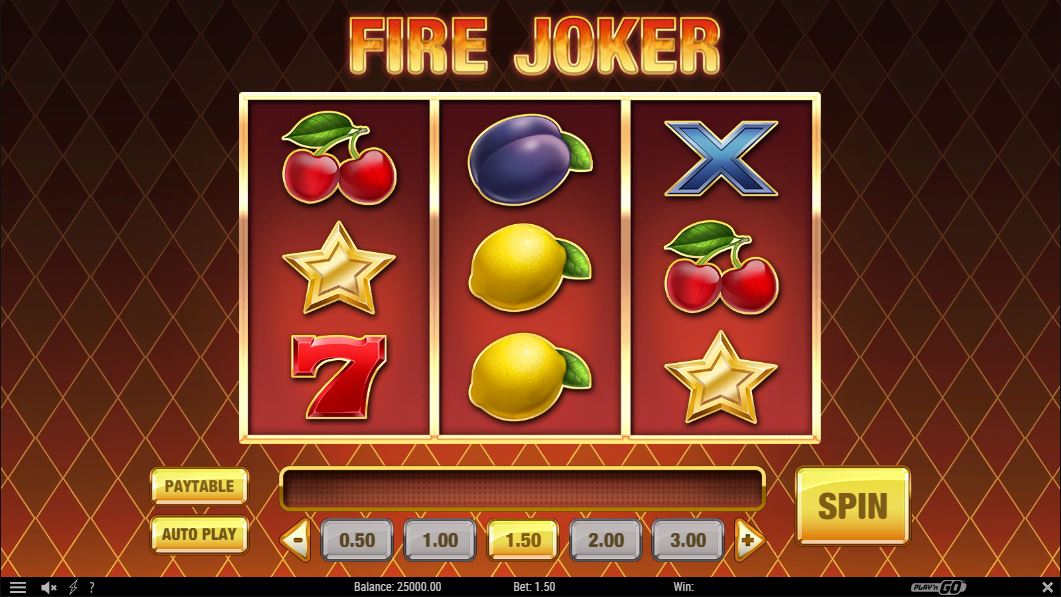 There are a number of bonus games within Fire Joker, which will please many who are familiar with the concept of bonus games within slots. Essentially, these will give you your biggest wins, the first of which is the Joker symbol which acts as the wild symbol in Fire Joker. This is the one of the most rewarding bonus features of the game, as the Joker substitutes all other symbols, giving you the biggest possible payouts and the best winning combinations.

Flaming re-spins are the next bonus feature of this game, which periodically occurs on non-winning spins. You will need to land two stacked symbols on the first two reels at the same time in order to trigger this feature, after which they will then become sticky. The third reel will then complete a re-spin, giving you another opportunity to have a winning combination.

Then we have the Wheel of Multipliers feature, which is triggered when you fill all three reels with matching symbols. The winnings you receive at this point can then be multiplied by anything up to 10x your stake, giving you a potentially huge win. However, there are no free spins features within this game.

Fire Joker embodies much of what you would expect from a classic 3×3 slot game and will be an especially enjoyable one for players who have played such games before. The lack of a free spins feature was somewhat disappointing, but this was more than made up for with the other three bonus features included within the game.

If you’re interested in playing Fire Joker, you can head over to a casino like Casino Jefe, 32 Red or various other casinos that support slot games.