Plenty of bonus features are on offer inside this Red Tiger Gaming video slot, but to find out more about these you will need to continue reading below.

Before can set all ten reels of Dragon’s Luck Power Reels spinning, you will need to know what game functions can be adjusted before each spin which we have taken the time to highlight for you below. 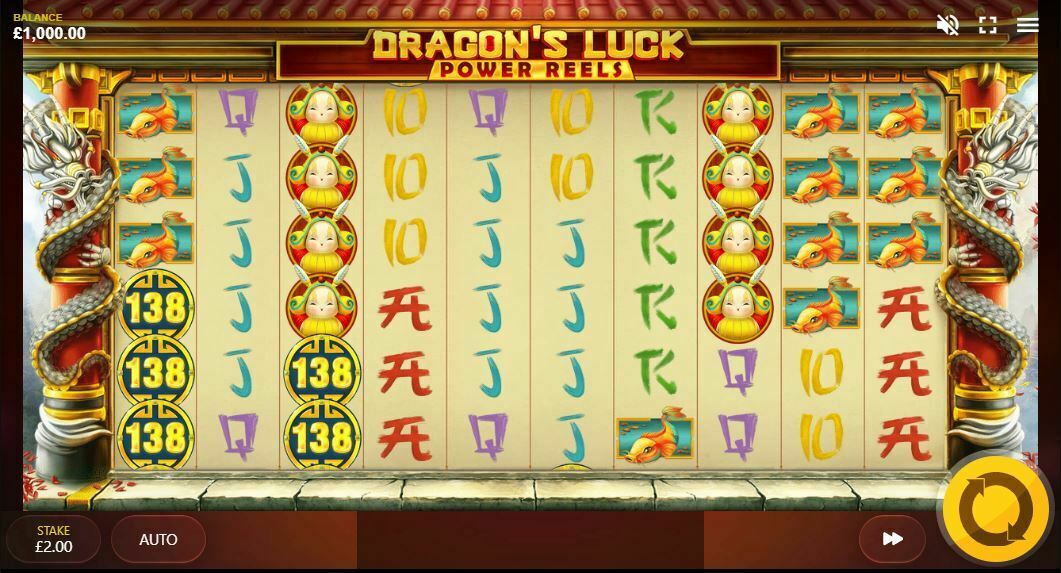 Firstly, Dragons Luck Power Reels players should look to adjust their bet size by using the “Coin Value +/-” buttons to set how many coins they wish to bet per spin. If you happen to be short on time then simply hit the “Max Bet” button to your bet to the maximum amount without having to manually adjust.

Dragon’s Luck comes with Asia-themed slot symbols and other features of the game that indicates a presence of Asian themes. Slot games like Divine Lotus and Sakura Fortune are very popular and share similarities to Dragons Luck, which is produced by Red Tiger Gaming.

As already mentioned, Dragon’s Luck Power Reels features a grid layout of six rows and ten reels, which is much larger than that of standard video slots. 30 paylines are available here and players can bet anywhere from 20p per spin to £20 per spin; placing this slot in a medium to high variance category. No progressive jackpot is on offer, but a maximum payout of 3,888x is available to players on every spin.

Features such as HTML5 and the theme which is very similar to Reel Keeper slot, which is also produced by Red Tiger Gaming. Both of these slot games are perfect for all of the features mentioned in this article.

The low-value symbols are represented by the following standard playing card icons; 10, J, Q, K, and A. The symbols you will want to keep your eyes peeled for is the lotus flower, goldfish, a doll, a 138 symbol, and gold coins.

These special symbols arrive on the reels stacked and once they land, they will proceed to spin to reveal a hidden symbol.

When this feature is triggered, the two dragons on either side of the reels will awaken and breathe fire upon the mystery dragon symbols to reveal higher-value symbols.

Dragon’s Luck Power Reels will award adjacent pays when enough symbols are lined up on any single win line.

The available bonus features are fairly simple but can lead to some very rewarding prizes for lucky players. Combine this with the 3,888x max payout figure and there is plenty to be won from this slot.