Divine Lotus is a Thunderkick slot game that was first released back in October 2019. This Asian-themed slot has been popular ever since its release and we will be taking a closer look at a number of aspects associated with the game. Continue on with our Divine Lotus slot review to learn more about the features and bonuses included within the game and how you can play it yourself.

How to play Divine Lotus

Before you begin playing Divine Lotus you must first be sure to select a stake and make it an amount that you are both happy and comfortable playing with. There is a wide range of stakes that you are able to select when playing Divine Lotus, meaning whether you are a high roller or prefer playing with smaller stakes you will be accommodated for by Divine Lotus. Simply click the bet symbol at the bottom of the screen, after which you will have a screen full of stake amounts presented to you. 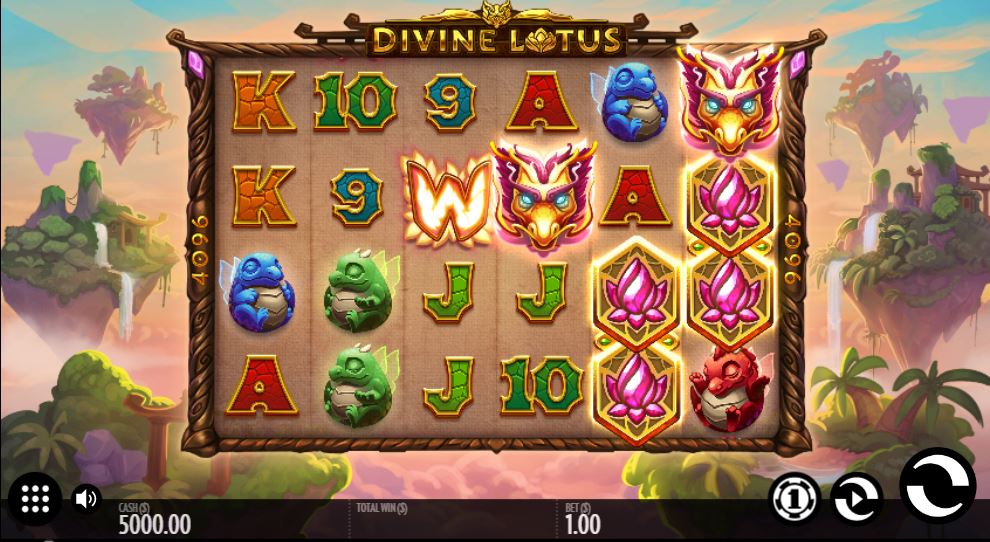 The Divine Lotus slot comes with an RTP rating of 96.14%.

There is a mystery symbol included within the base game of Divine Lotus that can randomly earn you some significant wins. This symbol will transform into a randomly selected identical symbol once it lands on one of your reels, after which it will then transform again into a high value symbol, giving you a tasty win with it as a result.

Divine Lotus also boasts a free spins feature that can be triggered during the base game when you land three lotus scatter symbols within the same spin. At this point you will be awarded two free spins, while you will also get an additional free spin every time you land a scatter within the free spins feature. There is also a meter keeping track of how many lotus symbols you land during play and once this has been filled it will remove an indicated symbol, which will then be replaced by a mystery symbol for the remainder of the feature that also gives you extra free spins.

Divine Lotus finds itself with plenty of features for its slot players, such as high-value symbols and other games, looking at the similar games by Thunderkick slots, Carnival Queen slot which has plenty of features by the game developer.

We had a lot of fun playing Divine Lotus and especially enjoyed the free spins feature once we had triggered it. While there may be more flashy slot games out there, this one certainly delivers despite it not having any bonus game that can be triggered.

You may also want to read about:
Carnival Queen Slot Review.