Those of you who were fans of the original Break Away slot will be extremely excited to find out that Microgaming has released a sequel that will grab your attention once again. Break Away Deluxe follows the same theme as its predecessor and overall looks pretty much exactly the same, apart from one big change on the reels which you can find out about below. Another slight change to this new rendition of Break Away Deluxe is the payline structure which has dropped from the original 243 structure to 88 paylines that can be selected. If you fancy finding out what else Break Away Deluxe has to offer, then continue reading below.

How to Play Break Away Deluxe Slot

Before you are free to set foot on Break Away Deluxe’s ice rink, you will need to know what game functions can be adjusted before each spin which we have highlighted below. 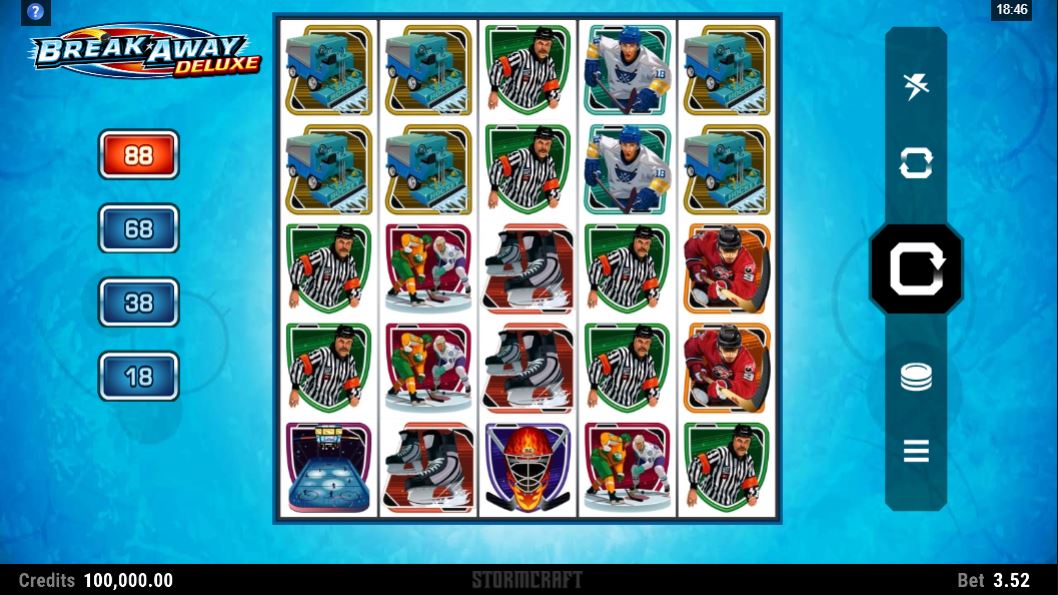 Firstly, Break Away Deluxe players should look to adjust their bet size by using the “Coin Value +/-” buttons to set how many coins they wish to bet per spin. If you happen to be short on time then simply hit the “Max Bet” button to your bet to the maximum amount without having to manually adjust.

One of the biggest changes to this Microgaming slot is that now Break Away Deluxe features five rows and five reels opposed to the original which had just three rows. Betting starts as low as 18p per spin and maxes out at £44 per spin. The maximum win available here sits at 30,000 coins.

Like the original, Break Away Deluxe uses theme-related symbols on the reels and includes images of ice hockey equipment, ice rinks, ice hockey players, pucks, and a referee.

The Break Away Deluxe video slot offers an RTP figure of 96.18%.

The game logo acts as the wild symbol and can only appear on reels 3 to 5 in the base game and on reels 2 to 5 during the free spins round. It is able to substitute for any other symbol on the reels excluding the scatter.

During the randomly triggered smashing wilds feature, all hockey players on reels 2, 3 and 4 will turn wild.

Break Away Deluxe offers a rolling reels feature which means any symbols that are part of a winning combination will disappear and new ones will take their place.

The flaming ice puck acts as the scatter symbol and players are required to land a minimum of three of these across the reels to trigger the free spins round. During the free spins round, the Multiplier Trail feature is activated which boosts the size of the multiplier.