A Wild West-themed slot is not hard to come by in the online gaming world, and now Red Tiger Gaming has made it just that little bit easier to find one by releasing their very own Wild-West slot with Bounty Raid. Bounty Raid is not only set in the Wild-West but pitches a noble sheriff against a band of bandits in an attempt to bring them to justice. Bounty Raid is a standard looking slot from the outside, with it made up of five reels. Bounty Raid does contain a selection of exciting bonus features, but to find out more about these, you will need to continue reading below.

How to Play Bounty Raid Slot

Before you can join the sheriff in his search for the troublesome bandits, you will need to know what game functions can be adjusted before each spin which we have taken the time to highlight for you below. 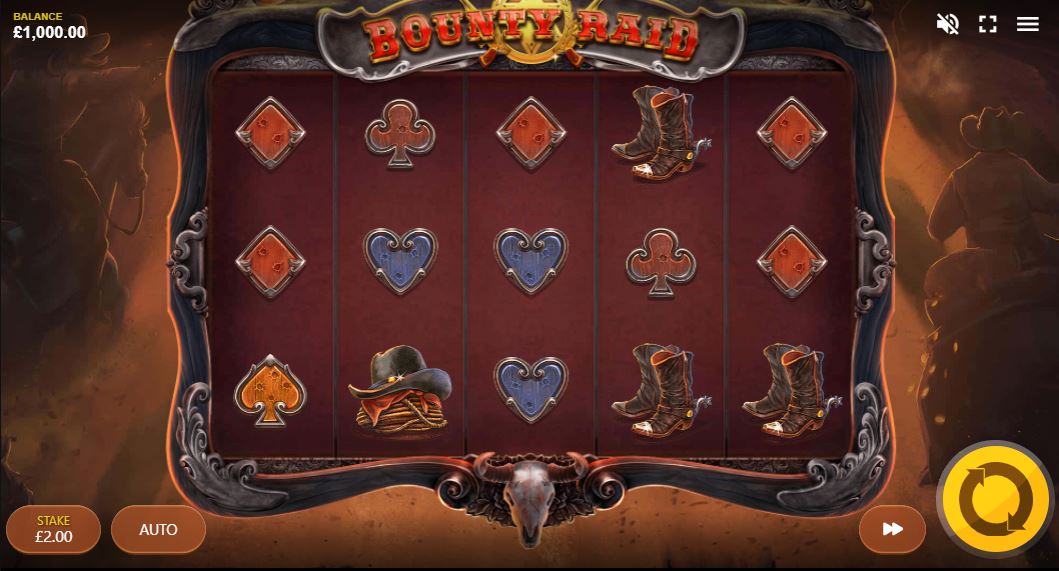 Firstly, Bounty Raid players should look to adjust their bet size by using the “Coin Value +/-” buttons to set how many coins they wish to bet per spin. If you happen to be short on time then simply hit the “Max Bet” button to your bet to the maximum amount without having to manually adjust.

Bounty Raid is a typical modern slot in terms of design with it made up of three rows and five reels. From these reels, players have a total of ten paylines to win from. Red Tiger Gaming’s Bounty Raid can be played from 10p per spin to £100 per spin. No progressive jackpot is on offer, but players can get their hands on a maximum payout of 1022x their total stake.

The Bounty Raid video slot offers an RTP figure of 95.71%.

There are five different bandit symbols found on Bounty Raid that all come with different values. The most valuable being the bandit with the white beard which comes with a 50x multiplier. The bandit payout become active when you trigger either two game features.

The bounty hunter feature is otherwise known as the streak respin round and can be triggered by landing the buxom female bounty hunter on the middle reel. Following this, any bandit symbols that fall onto the reels are locked in place, and a respin is awarded. During respins, only bandits, blanks or gold coin symbols can land on the reels.

The sheriff symbol can land anywhere apart from on the middle reel, and when he does appear on the reels, he collects all the values from each bandit symbol that is also on the reels. Following this, all sums are added together and applied to the total payout.

Red Tiger Gaming has once again done a great job in taking a very common theme and using it to make an incredibly unique video slot, similar to 888’s Wild Saloon slot. Bounty Raid gets its uniquity from the three available bonus features that are not only unique but are also great fun to play. On top of the fun gameplay, Bounty Raid provides players with plenty of winning opportunities too. So, head to any Red Tiger Gaming casino today to enjoy Bounty Raid.