How to Play Battlestar Galactica Slot

Before you can surge through space with Battlestar Galactica, you will need to know what game functions can be adjusted before each spin which we have highlighted below.

Firstly, Battlestar Galactica players should look to adjust their bet size by using the “Coin Value +/-” buttons set how many coins they wish to bet per spin. If you happen to be short on time then simply hit the “Max Bet” button to your bet to the maximum amount without having to manually adjust. 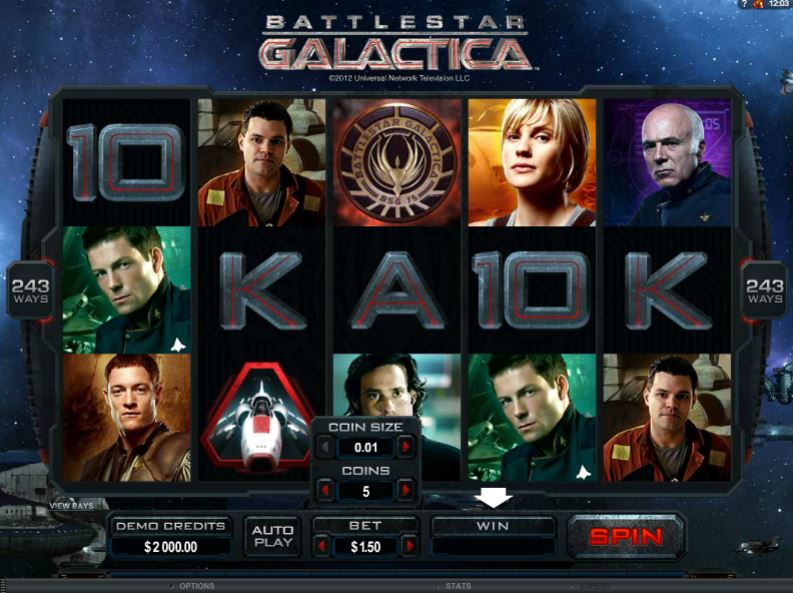 From the outside, Battlestar Galactica looks like an ordinary slot with it featuring three rows and five reels, but from these reels, players have a total of 243 paylines to win from. Players can bet anywhere from 30p per spin to £15 per spin on Battlestar Galactica and while there is no progressive jackpot on offer, players can win the fixed jackpot worth 20x their stake.

Battlestar Galactica uses standard playing card icons for the low-value symbols, including 10, J, Q, K and A. A spaceship and a variety of character images make-up the high-value symbols in this Microgaming slot, so be sure to keep a lookout for these.

Battlestar Galactica is based on a super modern cosmic space travel in which you’ll find your self deep in space, taking a look at a similar space-themed game ‘Arcade Bomb‘ by Microgaming.

The Battlestar Galactica video slot offers an RTP figure of 96.60%.

This bonus feature when triggered will turn up to five reels into wilds, drastically increasing players chances of winning.

When this bonus is triggered all standard playing card symbols (low-value symbols) will be removed from the reels.

Landing three or more spaceship scatters will trigger the free spins round, awarding 15 free spins and a 3x multiplier.

Battlestar Galactica is often named one of the best space-themed slot games out there. Microgaming’s Astronomical slot game has been popular since it’s release last year, and many other space-themed games have released since then proving to be popular.