If you are someone who has played slot games before, then there is every chance you have come across numerous slots with an ancient Egyptian theme, and now Red Tiger Gaming has added to the mix with Ancient Script. Unlike most other Egyptian-themed slots, Ancient Script is a bright slot and differs from the usual gloomy aesthetics found on these types of slots. Behind the reels, you can find a scorching hot desert, tall pyramids and the hot sun beaming down on the golden sand. Ancient Script is packed full with bonus features, which we take a closer look at below.

How to Play Ancient Script Slot

Before you can step foot on ancient sands with Ancient Script, you will need to know what game functions can be adjusted before each spin which we have taken the time to highlight for you below. 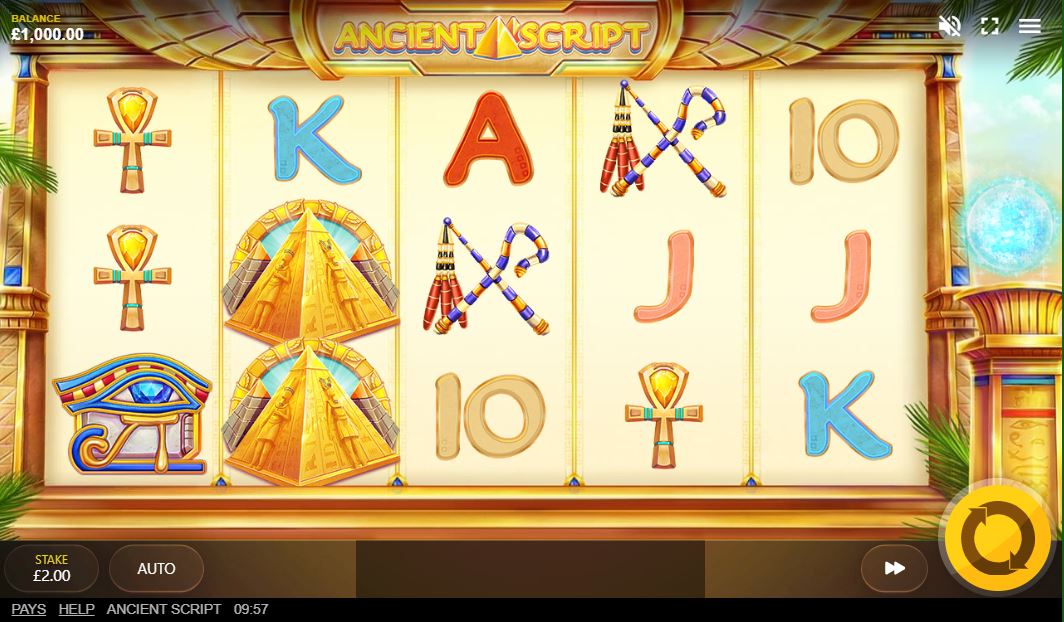 Firstly, Ancient Script players should look to adjust their bet size by using the “Coin Value +/-” buttons to set how many coins they wish to bet per spin. If you happen to be short on time then simply hit the “Max Bet” button to your bet to the maximum amount without having to manually adjust.

Ancient Script features a standard slot design of three rows and five reels, from this, players have a total of 10 paylines to win from. An impressive betting range is on offer here, with players able to bet anywhere from 20p per spin to £500 per spin. A fixed jackpot is available which will payout up to £1500.

The Ancient Script video slot offers an RTP figure of 93.2.

The Sphinx acts as the wild symbol and will substitute for any other symbols on the reels to create winning combinations.

During the free spins feature, expanding tiles comes with an extra feature as any win will cause symbols to expand over the entire reel.

Although Ancient Script may feature a very common ancient Egyptian theme, it offers some unique features that you do not come across very often. Red Tiger Gaming has done a great job with the design and if you combine this with the various bonus features, including the expanding tiles, wilds and free spins, and you have got a great slot.